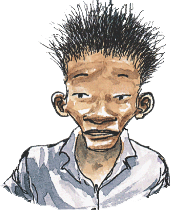 It's me, Bizza, Themba's best pal, and the best pal of Ntokozo, Nipho, Nekete and everyone who needs me, wa boana. Ke mosotho, verstaan jy, I'm sotho, but I'll speak anything. After all, I'm sharp, mfan'

It's like I have no medals for sport, but I'm a natural at all of them. And I never got one merit at school, but I'm cool. They can't hide anything from me.

Most of all, I don't know the meaning of the word 'fear'. I'm as much at ease on the streets as in the bush... Although some will dispute that last bit. But I must admit that since I've known Themba, I've seen some things that've made my hair stand on end... Yeh, yeh, I know what you're thinking

Actually, my hair stands on end because of my Gran.

I live with her, wa boan', because my parents are not around, and so she loves me to pieces, I mean to pieces boet, so much so it makes my hair stand up. So I slip out of the house whenever I can, to get away, you see.

Then she worries about me, I know it, and that makes my hair stand on end as well ... Eish.

So I spend my time with my friends, and since I've met Themba, it's been a blast. No peace for the wicked ... They say that's me!